Her research is to fabricate a molecularly imprinted quantum dots (MI-QDs) for rapid detection of phenolic endocrine disrupting chemicals (EDCs). Functionalized amylose was grafted onto QDs as receptor element to sense the EDCs, including Bisphenol A (BPA), 2,2'-Bisphenol F, anthracene, phenol, pyrene, and estrone. However, the selectivity of amylose grafted QDs was weak in recognizing those EDCs. Molecular imprinting technique was applied by taking target molecule BPA as template and embedded into the cross-linked amylose grafted QDs. The MI-QDs exhibited a good selectivity in sensing BPA over those EDCs. 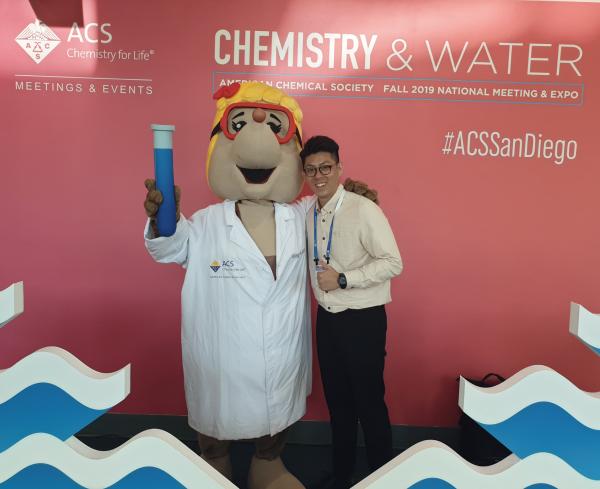 His research interest focus on structural design and fabrication of molecularly imprinted hybrid (MIH) for the selective adsorption of endocrine disrupting chemicals (EDC). EDC such as Bisphenol A (BPA) was selected as the template model to fabricate the MIH, the synthesis of MIH begins with imprinting BPA molecules in phenyl-based linear copolymer and latter coupling with inorganic polymer such as silica dioxide (SiO2). From his study, the role of organic copolymer was meant to enhance the hydrophobic affinity and selectivity towards BPA molecules, while the SiO2 was to protect the imprinting structures and inhibit non-specific interactions. Furthermore, he also studies the molecular recognition behavior/patterns of MIH for various kinds of EDCs in terms of size, shape/geometry, and functionality. Reserch interest : Cu(II) loaded weak anion exchanger(WAER) is prepared to efficiently remove ammonical-N (NH4+-N) from water. The kinetics, isotherm study of the Cu(II) modified WAER were investigated at different environmental condition like pH, NH4+ concentration etc. The isotherm study suggested that removal increases with increase of pH and maximum removal capacity is found as 10.04 mg/g at pH 8.04.Langmuir isotherm (R2 > 0.98) model was the best fitted model compare to Freundlich isotherm (R2 > 0.86) It is also found that rate of removal kinetics follows second order rate kinetics and it increases with pH as well as initial NH4+ concentration and max rate of removal as 0.0368 g/(mg-min). Also equilibrium is reached within 40 min.